App Domains and Their Uses

What is an app domain

An App Domain can be thought of as a kind of lightweight process. So What is a process?

A process is an isolated container where the resources needed to run a program are stored. Each process gets its own virtual address space and no process can access another processes memory. On a 32bit Windows system  each process has access a maximum of 3GB of memory depending on how the application was built, the version of Windows and how much memory Windows is currently using. On a 64bit system this RAM limit is raised significantly and will be limited more by the software than the hardware for example Windows 7 will limit this to 192GB where as Windows Server 2008 will go up to 2TB.

Even if you haven’t heard of application domains before you’ve actually already been using them. When you execute a .Net application a single Process is created by Windows then once the CLR has started a single Application Domain is created within that Process where the required Assemblies are loaded and begin execution. Its at this point (Runtime) where you can create additional Application Domains. 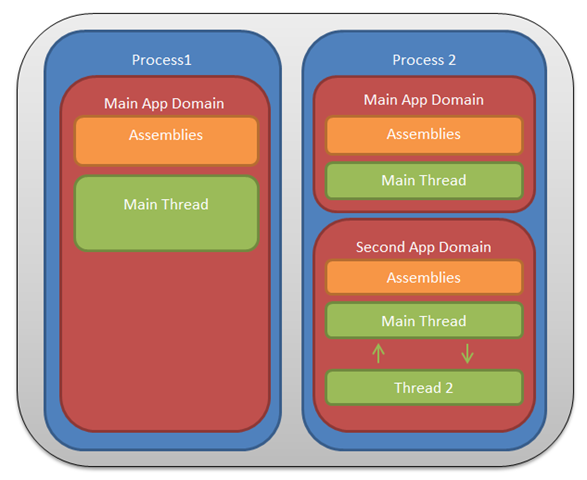 When to use Application Domains

Ok so now we kind of know what an Application Domain is but when would you want to use one? Well any of the scenarios below would be prime candidates

Here's One I Made Earlier

The complete example is available here.