Database snapshots are a readonly point in time version of a database. You can use them for things like readonly queries that don’t need to be on live data or even as an addition to part of your backup process. For example you could create a snapshot once an hour allowing you to recover objects someone might accidentally drop, you can even restore a DB from a snapshot (Under certain conditions) if you really needed to. 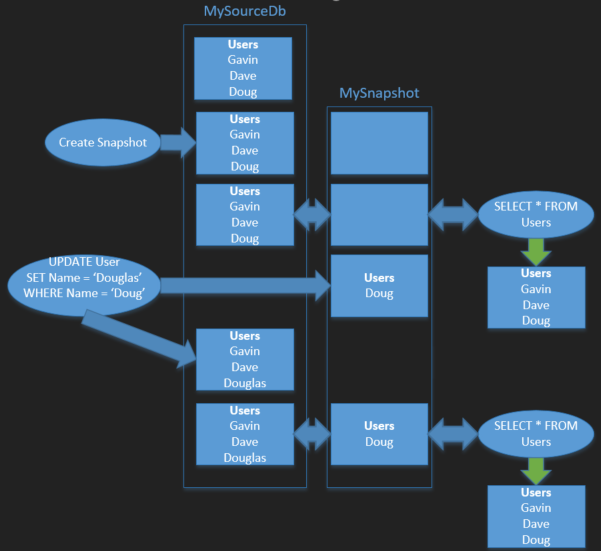 As you can probably tell the longer a snapshot is around the larger it will get as changes are made to the source database. However short lived snapshots or snapshots on databases with relatively few updates can be very fast to create and delete.

Let’s imagine we have some scheduled reports that run throughout the day and as our database is getting larger they are being blocked more and more by other activity on the database. As discussed in previous posts one way to combat this is with things like SNAPSHOT isolation level, however this isn’t always an option and if it’s not then DATABASE SNAPSHOT may be a good fit.

To setup an example run the following…

Assuming you’ve not changed your settings to READ COMMITTED SNAPSHOT you’ll see that tab 2 just sits there waiting for the transaction in tab 1 to complete. If you run COMMIT in tab 1 then tab 2 will complete.

Let’s create a DATABASE SNAPSHOT and try this again…

Now run the above blocking example again but this time run tab 2 against our new snapshot database, you’ll see our reports no longer get blocked by data modifications in our source database.

In most situations restoring after accidental data deletion should be done via database backups and transaction logs to get point in time. However if have a snapshot from right before the deletion the snapshot may be a quicker fix. They can be handy in dev environments where you want to try something but want the option to revert the datbase after, a backup/restore can take a long time on larger databases but a snapshot/restore can be quite quick depending on how much data changes after the snapshot is taken.

To restore a database with a snapshot neither database can be corrupt and the source database can only have a single snapshot. If you have multiple snapshots you’ll need to remove the others first.

At this point if you’re in full or bulk recovery you’ll want to take a full backup or your log backups are not going to run as now we’ve run the restore the database has no full backup to base it’s log backups on.